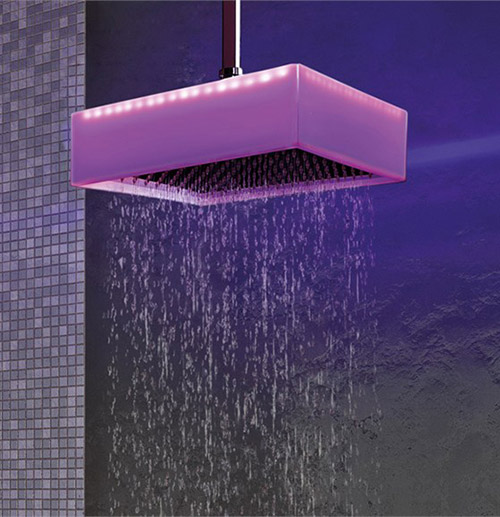 Talking about shower design, there will be no ends. As we knoe that there are a lot of shower design that can be applied on our bathroom. In this case, we only discuss about the shower head design which has cool concept. What kind of concept is it anyway? For more information, just stay reading this article, the writer will show you some of them.

Let us start from the modern cool shower head which is showed in the picture. This is kind of shower with futuristic design. Why the writer calls it futuristic because it can be controlled by the user. So, the user can adjust whether she or he needs hot water or the cool water. The hot water is indicated with red light which comes from the shower head, while the blue color indicates the cool water. This modern concept is perfect to be applied on modern bathroom design.

Next, we go to the sample of shower head which also has modern design. This shower head showed in the picture is bendable with some pits. So, there are six pits and pipes that can be bent by the user. This bendable shower head is made of flexible iron with futuristic concept. Let us compare with the other shower head concept which has mounted design. This shower head is fixed and cannot be moved because it is embedded on the ceiling or the wall. There are some designs which can be applied such as round mounted head, square mounted head, floating mounted head. This Design is perfect for modern bathroom as well, since the head is made of glass with nice color choice.

If you like color, you may have some shower head with wonderful colorful lightings. For example, you can see it in the picture, there is a bathroom with nice head shower and has three different color lightings like red, blue, and green. This cool concept of shower head is suitable for your shower room.